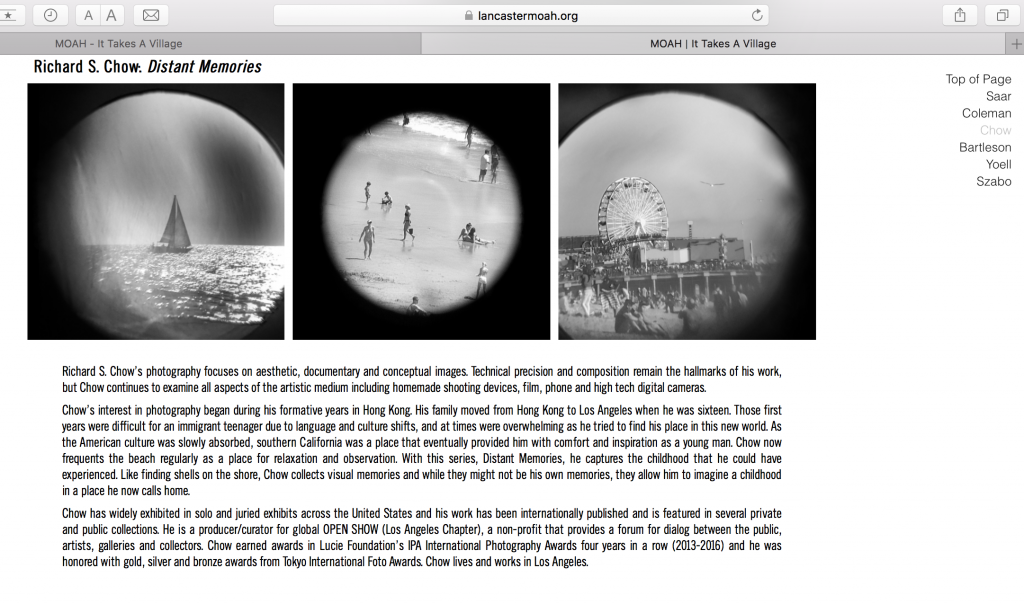 Press Release for MOAH – It Takes a Village

Richard S. Chow is honored to have his solo exhibit at the North Gallery of MOAH, as part of the IT TAKES A VILLAGE event from February 10 to April 22. He is presenting his fine art photography series “Distant Memories,” debut new work and unique installation never before seen. His limited edition books will be available at the Museum store. Complementary opening reception on Feb 10th 4-6pm PST. Richard S. Chow will lead an artist talk and tour of his work on February 25 beginning at 1 p.m. PST.

Los Angeles, CA, February 05, 2018 –(PR.com)– The Lancaster Museum of Art and History (MOAH) is proud to celebrate Black History month with the presentation of It Takes a Village. This exhibition opens to the public with a free reception on Saturday, February 10, from 4 to 6 p.m. and will run through Sunday, April 22.

Richard S. Chow is honored to have his solo exhibit at the North Gallery of MOAH, as part of the IT TAKES A VILLAGE event from February 10 to April 22. He is presenting his fine art photography series “Distant Memories,” debut new work and unique installation never before seen. His limited edition books will be available at the Museum store. Complementary opening reception on Feb 10th 4-6pm PST. Richard S. Chow will lead an artist talk and tour of his work on February 25 beginning at 1 p.m. PST.

Richard S. Chow’s photography focuses on aesthetic, documentary and conceptual images. Technical precision and composition remain the hallmarks of his work, but Chow continues to examine all aspects of the artistic medium including homemade shooting devices, film, phone and high tech digital cameras.

Chow’s interest in photography began during his formative years in Hong Kong. His family moved from Hong Kong to Los Angeles when he was sixteen. Those first years were difficult for an immigrant teenager due to language and culture shifts, and at times were overwhelming as he tried to find his place in this new world. As the American culture was slowly absorbed, southern California was a place that eventually provided him with comfort and inspiration as a young man. Chow now frequents the beach regularly as a place for relaxation and observation. With this series, Distant Memories, he captures the childhood that he could have experienced. Like finding shells on the shore, Chow collects visual memories and while they might not be his own memories, they allow him to imagine a childhood in a place he now calls home.

Chow has widely exhibited in solo and juried exhibits across the United States and his work has been internationally published and is featured in several private and public collections, most recently collected by the American Hotels in Los Angeles. He is a producer/curator for global OPEN SHOW (Los Angeles Chapter), a non-profit that provides a forum for dialog between the public, artists, galleries and collectors. Chow earned awards in Lucie Foundation’s IPA International Photography Awards five years in a row (2013-2017) and he was honored with gold, silver and bronze awards from Tokyo International Foto Awards (TIFA). Chow lives and works in Los Angeles with his wife and son.

It Takes a Village is comprised of six exhibitions addressing the dynamic of working as a community through the subjects of family, race, gender, and age. Featured in the Main Gallery at MOAH are the works of celebrated assemblage artist Betye Saar and her daughters, artists Alison Saar and Lezley Saar. It Takes a Village will showcase solo exhibitions of Richard S. Chow, Wyatt Kenneth Coleman, and Jane Szabo, with site specific installations by artists Lisa Bartleson and Scott Yoell.

Each of the artists featured in this exhibition explores the relationships and responsibilities of community. Betye, Alison, and Lezley Saar’s work consists of two and three-dimensional assemblages that examine history and identity through the juxtaposition of objects, photographs, mixed media, and fabric. The documentary photography of Lancaster resident Wyatt Kenneth Coleman chronicles the importance of engagement and oral history and the role it plays emphasizing the value of serving one’s community and family. Jane Szabo and Richard S. Chow present different work stylistically, but address similar themes of home, displacement, and sentimentality through conceptual photographs. Szabo records family history through objects while Chow’s images fabricate an imaginary history of what might have been if he had not been an immigrant. Lisa Bartleson’s large scale installation of hundreds of small hand-made houses explores the act of healing through community and engagement. The site specific work of Scott Yoell’s “Tsunami,” consisting of three thousand four-inch tall businessmen figures installed in a giant wave, represents the artist’s thoughts on the global economy and automation.

In addition to the regularly scheduled community engagement programs that MOAH, MOAH:CEDAR, and the Western Hotel Museum offer, this exhibition will include an artist talk and tour by local Civil Rights photographer Wyatt Kenneth Coleman on Sunday, February 18 at 2 p.m. Richard S. Chow will lead an artist talk and tour of his work on February 25 beginning at 1 p.m. A book signing and artist panel discussion with the Saar family and Dr. Betty Brown will take place on Sunday, March 25 from 12 to 2 p.m. This panel discussion will be immediately followed by an artist talk and tour by Jane Szabo beginning at 2 p.m. Other engagement opportunities brought to the Museum by the Center for Cultural Innovation include two workshops: Know Your Rights with the National Lawyers Guild, Saturday, February 17 at 2 p.m. and Making Art During Fascism with Beth Pickens, Saturday, February 24 at 2 p.m.

The Lancaster Museum of Art and History is dedicated to strengthening awareness, enhancing accessibility, and igniting appreciation of art, history, and culture in the Antelope Valley through dynamic exhibitions, innovative educational programs, creative community engagement, and a vibrant collection that celebrates the richness of the region. MOAH is open Tuesday – Sunday, from 11 a.m. to 6 p.m. with extended hours on Thursday until 8 p.m. For more information, visit www.lancastermoah.org or call (661) 723-6250.

Sorry, the comment form is closed at this time.